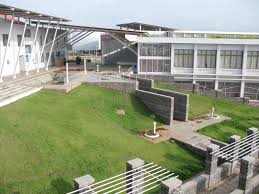 It was during the second year of my engineering that MBA- one of the most coveted degrees in India had one more child under its spell. This computer science and programming lover kid was slowly and surely being drawn to the beautiful world of all that was business. To secure an admission into one of the most prestigious B-schools of the country became soon became the star that I wanted to grab with my hands and never let go. The preparations went fine, burning the midnight oil and mastering quant and verbal ability was all that I could think of.

Soon the exams season came along and one of them was the well-known speed tester SNAP to enter some of the best colleges of Symbiosis International University. SIBM-Pune since then became one of the institutes that I aspired to be in. The joy of getting shortlisted was one of the most special things to have happened. Then came the watershed moment of GE-PI. It was during this time that I had the opportunity to visit this breath-taking campus. I was absolutely convinced that SIBM-Pune is a college to spend the two best years of your life. Later when SIBM-Pune welcomed me with a ‘Congratulations’ message, that was it. I just couldn’t wait to be at the best B-school of Pune.

I arrived here on 1st June. We had a big contingent coming from Ahmedabad and the city meet with seniors and the to-be class mates was a harbinger of the amazing things to follow. The opportunity nay privilege to be among the few hundreds to join one of the most prestigious B-school in India, was a moment that puts me short of words. Room number 250 with its amazing view of the majestic football stadium and the busiest of lanes at SIBM (pun unintended) was waiting for me. The weather, the amphitheatre with its beautiful view of Pune city below us left me spellbound. The curtains to the programme were opened with the Director’s address that had all the students buzzing with energy and vigour. The third day of the induction schedule was probably the most important since this was the first time we discovered each other. I was awestruck by the diversity of talent that SIBM had to offer. The late night preparations for the pre-induction test was probably the time when we realized what ‘we’ all can do together. The interaction with the ever-helping faculty and the SIBM staff thus far has reaffirmed my views that SIBM-Pune with its picturesque campus and surroundings not only produces some of the best managers of the country but also shapes the personality of its students in ways that are unimaginable. I am thrilled to look into the future because if three weeks can do this to me then I can’t imagine the value addition that we all might have in the coming two best years of our lives.
Kishan Upadhyay, First year MBA student @ SIBM-Pune