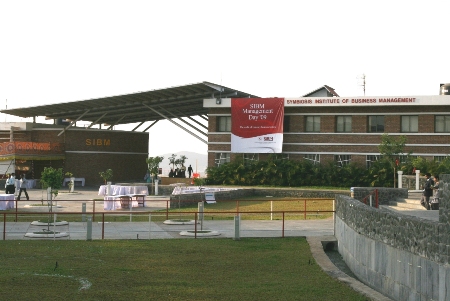 Monday morning…8.30 AM…Rahul woke up to the constant buzz of the alarm in his mobile. One more night had passed with five hours of sleep. While getting up from bed, he cursed the person who had invented the alarm. He got ready in a hurry, skipped his breakfast to reach the class just in time before the classroom door closed. The first lecture went on with a discussion of a case study. Rahul was contented on his contribution to the case. The moment the bell rang, Rahul ran to the canteen to fill his stomach with some snacks to prevent the pangs of hunger. He reached back in time for the next lecture. The second lecture was Advertising Management. Students always look forward to this lecture to learn about new ads.

Due to all this, Rahul felt like the most relieved person in the world. After about 15 minutes, a peon entered the class with a bunch of papers. The professor smiled with pride and announced a surprise test. A wave of tension spread among the students. Rahul’s face turned pale with fear due to this sudden announcement. While the thought of scoring a zero was looming in his mind, he also felt as if he was being completely immersed in darkness.

The howling of a dog at a distant place resulted in Rahul waking up from his sleep with a start. He was shocked and astonished on realising that whatever had happened till then was a dream. He even pinched his hand to make sure that it was a dream. He checked his watch only to realise that it was 5am. Even at this early hour, he remembered his granny’s words – “Early morning dreams always come true”. But he felt that his granny’s words wouldn’t come true and went back to sleep with a sense of relief filled in his mind.

As usual Rahul woke up at 8.30am, got ready and proceeded to class. On the way he met one of his classmates, Anil. While they walked hurriedly to college, Rahul explained the dream to Anil.  Anil burst out with laughter and made fun of Rahul for having such a nightmarish dream. Even though Rahul laughed along with Anil, something left him wondering whether the dream would come true or not.  They reached the classroom in time.  Each and every student had a fun filled group task in the first lecture. The second lecture started late by 10 mins. Rahul smiled thinking that his granny had been AGAINproved wrong.

Exactly 5 mins later, a peon entered the class with a bunch of papers. While the reactions of the other students were normal, a tinge of fear filled the minds of Anil and Rahul. The very moment their eyes met, Anil gave a wary look at Rahul. Seeing this, Rahul froze thinking whether his dream was really coming TRUE!

Posted by: Vikram Kumar
View more posts
At SIBM Pune, dreams always do come true!!!! 0 out of 5 based on 0 ratings. 0 user reviews.
B – Schools using social media to reach out to the world!
Coffee with SIBM – An exciting journey across 21 cities of India!