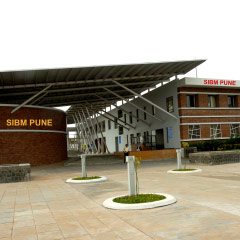 It was February, early morning. We were halfway through from Pashan towards lavage hills.. and there it was, logo of Symbiosis International University placed at the top of the hill, hollywood style. As we neared our destination, I looked around the silent suburbs, and the little buildings blooming here and there.. Pashan, a sleepy city.  In contrast, we were greeted a plethora of activities inside the campus. ART members running around to make arrangements for interviews, students rushing to the mess for breakfast, aspirants and their parents walking around the campus, awestruck by the beauty surrounding them. I shivered and adjusted my blazer to the chilly wind blowing through the parking lot overlooking the vast football ground. The sun was shining above the podium, the view was magnificent. That was the moment I fell in love with the hilltop campus of one of the  Best B School in India, SIBM.

Pursuing an MBA in India is difficult. I was one of the lucky ones to have cleared one of the toughest MBA entrance exams in india, the SNAP from among thousands of aspirants. And now it was time for the GE/PI/WAT interaction. The moment I set foot in the campus,I wanted to be a part of it. The GE and WAT was conducted swiftly, and thanks to the ART team who were reassuring us throughout by sharing their own experiences, my interview went fairly well. Symbiosis chose me, like I had chosen it.

After a 3 months long and gruelling wait to get to the most sought after B School in Pune , I arrived, yet again to this lovely campus in June. This time, I was greeted by thunder, black clouds and rain! oh and beauty it was, to watch the campus covered in fog. The first few days gave us an idea of how MBA in Symbiosis was going to be. It has opened up a window of opportunities for me.

It is hard to believe it has only been two weeks since my arrival. So many things have happened in so short an interval. After an enlightening and fun-filled induction, stressful days before pre-induction test(based on materials sent to us beforehand in mail), after exam parties and trips to the city with new friends.. it’s as if we have been here for ages!