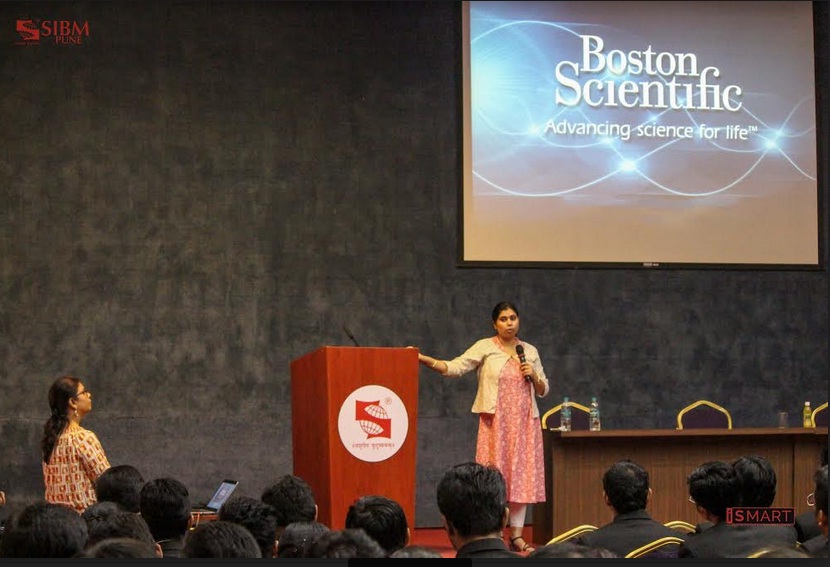 No comments
SIBM Pune played host to Ms. Surabhi Singhal and Ms. Megha Saini, from Boston Scientific India. Ms. Singhal is an alumnus of SIBM Pune, 2011-2013 batch.
Ms. Singhal gave a brief overview of the history of Boston Scientific and its entry into India. One of the largest medical device companies, it was found in 1979 with the aim to advance science for life. With 12 manufacturing facilities spread across the world and 23,000 patents, Boston Scientific deals with 52,000 patients on a daily basis.
The dais was later taken over by Ms. Saini and she delved deeper into the innovations taking place in the company and the medical industry in general. She enlightened the students about the positive impact such innovations have on the lives of people.  Ms. Singhal and Ms. Saini later entertained the barrage of questions that inquisitive minds in the audience had about the organization.
Dr R Raman
Director – SIBM Pune
and
Dean – Faculty of Management- SIU

Posted by: Dr. R Raman
View more posts
Professionals from Boston Scientific for a session at SIBM Pune 0 out of 5 based on 0 ratings. 0 user reviews.
SIBM Pune student emerges as winner in GODREJ LOUD 2017
Professor from Deakin Business School – Australia at SIBM Pune

Intern’s take on their corporate experience

SIBM Pune introduces Shop Talk- An intern’s take on their corporate experience, a series where…

Intern’s take on their corporate experience

Placement Advisory Team at SIBM Pune has always set high standards for itself and has been successful in surpassing them time and again !