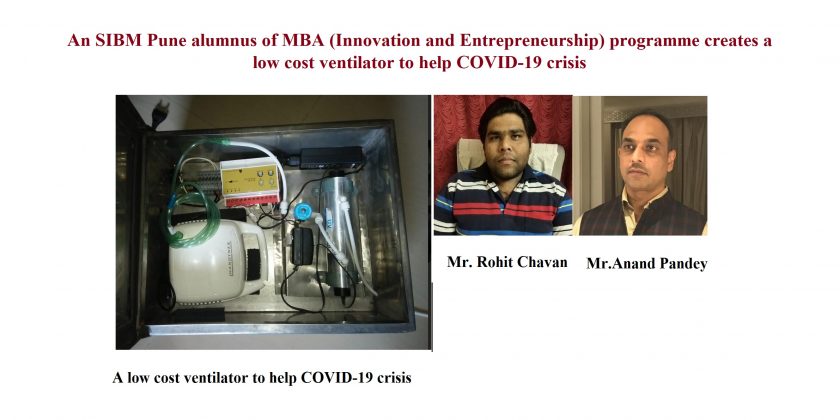 I am happy that our students are given inputs which they can put to use and innovate to create solutions for complex problems. I am proud of Rohit Chavan and his partner. The product ( low cost ventilator) that they have built is a service to humanity

Rohit Chavhan, an alumnus of SIBM (Symbiosis Institute of Business Management) Pune from the batch of 2017, has collaborated with his business partner Mr Anand Pandey to develop a low-cost ventilator which can be used during the COVID-19 crisis scenario.

Rohit has his primary business in the field of hydraulics and automation and has diversified his business into agriculture, fertilizer, FMCG/FDA products. He has his presence in the states of Maharashtra, Karnataka, UP and Bihar. His business partner, Mr Anand Pandey has more than 15 Patents under his belt and both of them keep innovating products which makes their business to have exponential growth year after year.

Mr. Chavan’s company is named Royoch. His firm is located in Ahmednagar, Maharashtra and is an LLP (Limited Liability Partnership) firm. As he hails from a small town of Maharashtra he was concerned about the growing numbers of COVID-19 in the state. He decided to make use of all his learning from the subjects like design thinking, creative problem solving, frugal innovation etc which he pursued during his MBA(I&E) programme, to create a ventilator which is portable, cost effective, easy to use.

He and his partner decided to create the prototype at a very fast pace and they did it in a span of 3 days ! After creating the same they gave a demonstration of their prototype to the B.J. Medical College, which is a premier medical college located in Pune. Both of them were appreciated for prototype that they had built and got several inputs on the features that could be to be incorporated in the prototype.

They took as much advise as possible from the medical fraternity and are now confident to produce 150 ventilators per day. The basic prototype, i.e. the very basic model which has only with only control for BPM (Breath per minutes) costs just Rs 2000.

The ventilator that they have built is handy and weighs less than 5 kgs. It also consumes low power (90W) and works on 220- 240 volts AC. They also plan to add a feature by which the ventilator can work using invertor (batteries), so that it can be used at rural parts of India.

They built the low-cost ventilator using components that were available with them. The components that they used to build the prototype included a nebuliser (in placed of an oxygen cylinder) as it uses the air from the surrounding, a sequential timer (to control the number of air strokes to be supplied to the patient as per convenience) a solenoid valve (to control the airflow to the mask) and a UV filter (to kill bacteria present in the air flowing through the pipes). The main unit includes pressure gauges, flow control instruments, etc. which makes the model as robust as any other ventilator. The current lock-down is troubling them as they are unable to get components from the market. They are certain that the model that they have built can be used at both urban and rural locations, but it will be a boon for small rural hospitals which don’t have sophisticated ventilators in their disposal. The young lads have now decided to participate in Govt of India’s Covid-19 Challenge competition.

Posted by: Dr. R Raman
View more posts
An SIBM Pune Alumnus of MBA (Innovation and Entrepreneurship) programme creates a low cost ventilator to help COVID-19 crisis 5 out of 5 based on 1 ratings. 1 user reviews.
SIBM Pune students will get access 3800 courses and 400 Specializations from COURSERA
Quizzing & Debating Society of SIBM Pune is the official “Knowledge Partner” for the Dare2Compete “Online Quizzing Festival Season – 5”