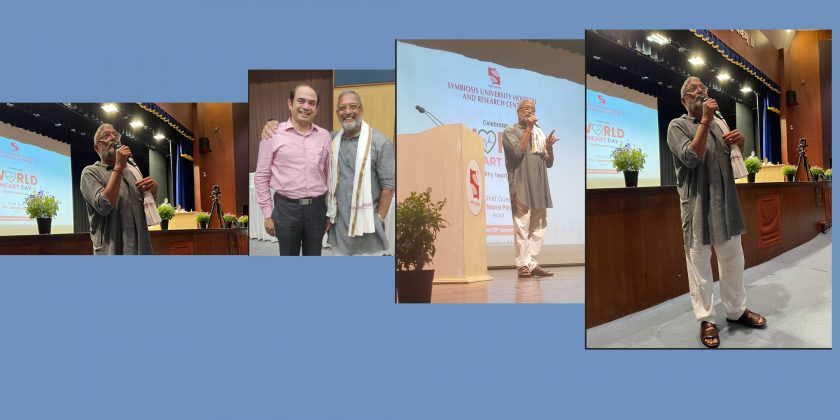 Vishwanath Patekar, better known as Nana Patekar, is an actor, writer, and film maker, and the founder of Naam foundation – a non-governmental organization started by him and Makarand Anaspure.

On the world heart day  – Wednesday , 29 September 2021 actor Mr.Nana Patekar visited Symbiosis International (Deemed University) and interacted with faculty members staff members and those students who were present on campus.

The actor has played versatile roles over the years and movies like  ‘Parinda’, ‘Krantiveer’, ‘Apaharan’ and ‘Natsamrat’, won him awards and acclaim. His contribution to the world of cinema even earned him the prestigious Padma Shri award from the government of India. While interacting with him I was amazed to know that he had done a three-year army training programme for his film ‘Prahaar’ and was given the honorary rank of Captain. Post his film’s shoot, he reportedly went back and served in the army during the Kargil war.

He is a down to earth, very humble and highly energetic individual. Naam Foundation (a non-governmental organization started by him and  Makarand Anaspure) has done impressive work for betterment of farmers in the drought-prone areas of Marathwada and Vidarbha in the state of Maharashtra, India.

The students who were present on campus enjoyed interacting with Nana Patekar.