Homo-sapiens of the post-modern era is skeptical of all things inorganic, besides, of course, the big established names of the business world. Inorganic growth refers to the growth of an organization by means of acquisitions and mergers. It allows them to avoid the pain of building a company or a division ground up, test its feasibility and of course hire some of the best minds for the same. But that is only the bright side of the story; the same acquisitions and mergers, more often than not, sink the mightiest of the organizations, sabotage their brand equity and jeopardize their core businesses. 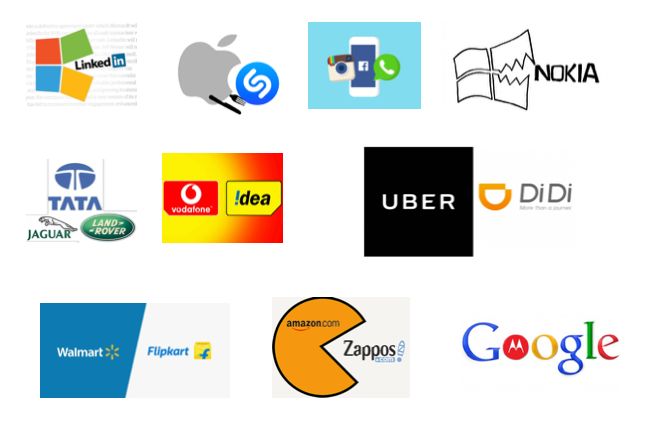 The above images tell us a distinct story about inorganic growth, but the common link between all of them is that they, initially, grew in the most organic fashion. This goes on to prove a point that in order to grow in an inorganic way, an organization should first reach a certain level of competitiveness, with a base strong enough to deal with the uncertainties of mergers and acquisitions.

The above illustrations show a few of the largest mergers and acquisitions, but have they all stood the test of time? That’s a question to ponder upon.

Microsoft’s acquisition of LinkedIn proved to be a masterstroke but its acquisition of Nokia was one of the worst decisions in the company’s history. The coming together of Uber in China with Didi Chuxing made sure the former wouldn’t have to face the wrath of the Chinese government and got promised space in the country. Similarly, Idea Cellular and Vodafone India came together to fight its rival Jio (a relatively new competitor), but whether it will be successful, only time will tell. Talking about Tata Motor’s merger with JLR and Walmart’s acquisition of Flipkart, both send out a clear message. It is easier to buy an online retail business for Walmart than to create a brand for itself in India, similarly, it is easier for Tata Motors to venture into the luxury car segment by the association itself with JLR than to build a luxury brand ground up. Apple obviously acquired Shazam to increase its offerings and Amazon acquired Zappos because who wants a competitor when the competitor can become a partner. Google happens to be a marquee company in the tech world and would obviously want to compete in any field it can, hence the acquisition of Motorola. It gave Google the power to directly compete against Apple and Microsoft in the hardware technology segment. Facebook’s acquisition of WhatsApp and Instagram made it the biggest player in the social media segment but will that not have a cannibalistic outcome? And does it insure Facebook against new disruptive startups? Pressing questions for Facebook to answer. Let us now discuss the challenges and benefits of inorganic growth of businesses in detail.

Mergers and acquisitions are obviously done with a positive outlook towards the future, but not all mergers and acquisitions are done willingly. It can not be said that Idea Cellular and Vodafone India merged willingly; because they didn’t have the plans to, but Jio came into the market and disrupted it. This merger was undertaken so that both these companies could salvage their situation and stay alive in the future by becoming strong enough to compete with Jio.

The major challenges of inorganic growth are

Despite the shortcomings, the benefits of inorganic growth seem to heavily outweigh its challenges. Trends suggest that if an individual can build an organization good enough, there are merging and acquiring opportunities waiting in line for his company. Let’s take into account the takeover of UTV Software Communications Ltd by Walt Disney Co., Walt Disney Co. couldn’t have possibly understood the Indian entertainment industry from the US, and building the content that UTV had already done over the years would have been a distant dream. Moreover, building animated content (which is the forte of Walt Disney Co.) for India and competing with Hungama Channel (Subsidiary of UTV) again seemed to be an uphill task. So was acquiring UTV a masterstroke for the Walt Disney Co.? Well Yes, under proper Indian leadership and American support, it has stood the test of time and is still going strong along with a feather being added to the cap of Walt Disney in the South-Asian market.

The major benefits of inorganic growth are-

Mudit is an MBA first-year student in Innovation and Entrepreneurship with a deep interest in the business world and considerable insight into the field of traditional businesses. An aspiring entrepreneur, he is interested in integrating the after-life service market before eventually foraying into the energy business.

Posted by: SIBM Student
View more posts
Inorganic Growth of Businesses 0 out of 5 based on 0 ratings. 0 user reviews.
Shortlist for SIBM Pune MBA and MBA(I&E) has been released
SIBM Pune is the first institutional member of International Association of Innovation Professionals (IAOIP) in India.

After a year of gruelling preparations, cracking the entrance examinations, and another three months of…

Businesses today have become smarter and pro-active with time. They understand their customers’ pain points…